Contains SPOILERY SPOILERS for the Doctor Who 2011 Christmas Special
So, I witnessed some Doctor Who filming this fine evening. It was strange: it was pitch-black, and it wasn't even cold. It was great. Anyway, as always, it was awesome. 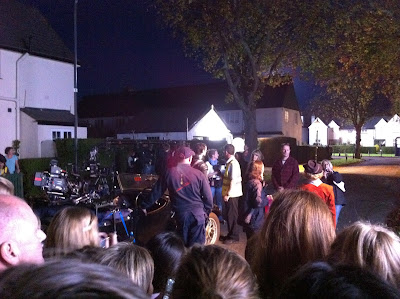 Matt Smith and companion of the episode, Claire Skinner were there. During the time I was there, Claire drove a vintage car down the road towards the TARDIS as The Doctor, in a spacesuit, sat in the passenger seat...with the helmet on backwards. They did that twice with the epic camera attached to the back of the car. The third take was done with the CAMERA CRANE/JIB.

At first, they did a rehearsal with just a random person (the car's owner) driving. The teenagers next to me were so confident that "they will edit the real actors into that shot, because it's too dangerous to have them really driving". I just rolled my eyes. First of all, they had already driven the car in the previous shot! Second of all, 'editing the real actors into the shot' would be so expensive and just pointless

Here a video of this event filmed by @simon_watkins on 'the twitters': http://yfrog.com/j5vgwz

At one point, a man with a sheep turned up. The sheep was just stood (with its owner of course) behind the swarm of fans who were leaning against the barriers. The sheep, and the owner, soon disappeared. Apparently, the sheep was used for filming after we left. That makes a little more sense now. (even though the random sheep makes quite a good story) 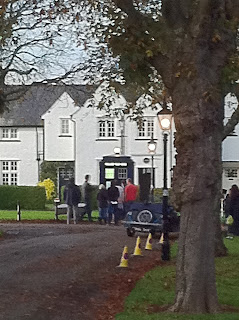 The TARDIS was there. It was quite far away from the 'barricade'. But it was there!
Posted by thesilence94 at 21:48